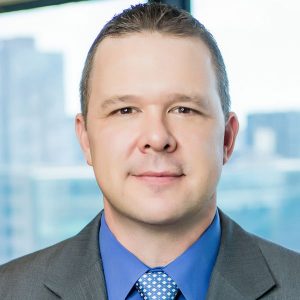 David was born and raised in St. John’s Newfoundland. Interested in behavioural neuroscience and business administration, David completed a Bachelor of Science degree from the Memorial University of Newfoundland. This interesting academic combination led David to pursue law. He obtained his Bachelor of Laws degree from Dalhousie University and moved to British Columbia in 2005.

David’s area of practice is in civil litigation. He focuses on personal injury claims and insurance litigation. David has appeared at all levels of court in British Columbia and has appeared before the Federal Court of Appeal. He holds extensive knowledge of all aspects of an injury claim – from dealing directly with insurance adjusters to coordinating medical and rehabilitative treatments. Enlisting experts, such as engineers, medical specialists, and financial consultants is a part of David’s strategic method as he employs tactics and measures to ensure his clients receive full and fair compensation for their injuries.

Known as efficient, trusting, and professional, David has established himself as a lawyer with integrity and drive. His reputation in the legal sphere and beyond has given him a leading advantage in his practice. When David isn’t dedicating his time to his work, he can be found playing sports or avidly watching from the stands. David loves to play golf and enjoys spending time on the North Shore with his family.

“David is the best lawyer I know when it comes to personal injuries. David has helped my family, friends, and myself in seeking the most fair compensation with our ICBC cases. Anytime I have questions regarding my case he would respond in a timely manner with great insights. I fully trust David in representing me whenever I need to deal with ICBC. I highly recommend his services and I continue to give my support by referring him to any of my family or friends who need a personal injury lawyer.”

“I contacted David Sinnott to represent me in an auto accident claim and he did so with professionalism, integrity, outstanding knowledge, and advice to bring my case to a successful conclusion. I cannot begin to express the wonderful experience I had with the expertise of Pacific Law Group through this difficult time. I highly recommend and appreciate Mr. Sinnott and Pacific Law for all your legal needs.”

“David is an exceptional lawyer! As an Acupuncturist, he is my ‘go to’ referral for any of my patients whom have been in an MVA.  David has helped many of my patients get the legal help they need, to be fairly reimbursed from ICBC. He makes life less stressful by handling all of the legal stresses of an MVA, so they can focus on healing. Thank you David for being such a great help! It is beyond wonderful to know you, to refer patients, friends and family to.”